Those that thought vinyl was to die at the hands of digital music have, thankfully, been proved wrong with the continued strength of a record scene which is apparently as healthy as ever.
But tape would be widely agreed as being a truely lost format thanks to the CD and laterly downloads.
It goes without saying that this author has always had a soft spot for the old ferric and still employs a Yamaha Deck on the bridge of the good ship BUCW. Especially good for adding a lo-fi compression to anything that sounds a little too clean, various artists have been getting heavy with tape in their production process ever since it was rendered obsolete by digital recording.
This production use is granted, but you’d be hard pressed to find official release mixes or albums on cassette until now. 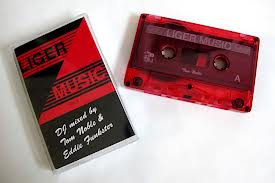 Two great new tapes have prompted this author to shout, the first from Liger Media in the shape of the third instalment of their Liger Music mix series. Side A plays host to Tom Noble who treats us to an 80s Lovers Groove set. Side B is taken care of in a more traditional Boogie Funk vein by Eddie Funkster. This is well worth seeking out, as are the preceeding two selections released on CD (BUCW review).

The second MC offering is the superb SASAC album on Omega Supreme Records. This Stockholm based producer is making downbeat Synth Funk in a very similar mould to Dam Funk and is well worth checking out. He has a 7″ out but this cassettte features sixteen tracks of tripped out bliss for less than the price of a 12!
This release is a promo of a forthcoming LP due this year. Both these tapes are distributed by the mighty PPU Records and can also be acquired from a number of stockists worldwide.
So, dig out your walkmans, clean your heads and seek out these fine cassettes. Long may the humble tape remain with us.

This entry was posted in Fresh. Bookmark the permalink.